One of the rallying cries of the failed Drug War has something to do with stopping the violence related to illegal drugs. However, the government seems to miss the point when simply legalizing marijuana would prevent many tragedies from occurring. Case in point: the murder of 26-year old Shawn West. 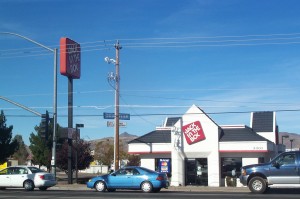 West was with his brother and a friend, parked in a Jack-in-the-Box parking lot waiting to make a big marijuana deal. Shawn West had a pound of marijuana with him when an acquaintance showed up to make the purchase. Before the marijuana changed hands, Andre Powe leaned into the Wests’ car and pointed a gun at them. Supposedly in an effort to protect his brother, Shawn West lept towards Powe and was shot dead.

According to the Sacramento Bee, Andre Powe is on trial for special-circumstance murder. His attorney says West also had a gun. But the surviving West denies there were any weapons present in their vehicle.

Cort Milgrim, the intended marijuana buyer has already pleaded guilty to first-degree murder and to child endangerment for bringing his 14-month old daughter to the encounter. Joel Satchell, who drove Milgrim to the scene, pleaded no contest to voluntary manslaughter.

All of the men in this case were in their late teens or early to mid-twenties on the night of the murder. This wasn’t some Mexican drug cartel deal, or some large cocaine buy. This was about marijuana—a substance less harmful than beer but vilified to the same extreme as heroin in some jurisdictions.

Would this murder have occurred if marijuana was readily available and regulated? It’s not likely. But instead of using cases like this for justification to reduce the money wasted on the war on drugs, the government will use this case and others like it as an example as to why they need to continue the over-funded and over-hyped complete failure of a drug war.

The bottom line is this: marijuana is illegal and governments (especially the federal government) are committed to keeping it that way. Until that changes, people will face harsh penalties for crimes related to marijuana possession, use, cultivation, and distribution.

The government has spent more money trying to repress this plant than they likely spend in any given year on education. It shows where their priorities are.

Fortunately, if you are charged with a marijuana offense, you still have options. Whether you are accused of pot distribution or a robbery in connection with a drug deal—our attorneys may be able to help. Call us today for a free consultation on your case.