Since 1999, the San Francisco Police Department has been reporting skewed racial arrest data every single year. They’ve been classifying Hispanics as “white” and Asians as “other”, eliminating any sort of reliable information on the racial demographics of SFPD arrests. This means we don’t know if there are arrest disparities or if the SFPD practices racial profiling. We can’t look at the data because the data is flawed, and basically useless. 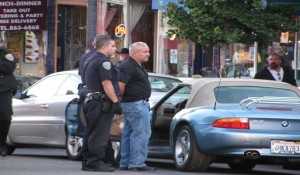 According to the Bay Citizen, the state began reporting the flawed stats in 1999 when the Crime in California reports started being posted online by the California Department of Justice.

The 2010 data suggests that there were 8,198 African Americans arrested in San Francisco, 9,151 whites, 2,800 “other”, and 316 Hispanic adults. The Hispanic adults listed come from other agencies in the area (like the CHP), who don’t seem to have an issue reporting the correct information. So, essentially, according to the numbers, no Hispanics were arrested by the SFPD.

So, what does the SFPD have to say about their admitted mistake? That it’s a technology issue. Apparently, the system used to track arrestee race was installed in 1972—40 years ago—and the only options available are African American, White, and Other.

“You’re making it sound like officers choose to do this. It’s what the system has available to the officers to put in,” said Deputy Chief Lyn Tomioka.

Chief technology officer Susan Griffin says the department “has no idea” if any of the statistics reported to the state are accurate. “Not only can we not tell you if the numbers are right, we really can’t articulate what the problems are, or if there are problems.”

So, why does it matter?

Each year, police agencies across the nation are required to report arrest data including race. This data makes its way to the FBI’s Uniform Crime Report. The data is used to analyze trends, spot racial profiling, and track crime overall.

By misclassifying Hispanics as white, the San Francisco Police Department has narrowed the gap between black and white arrests, potentially covering significant disparities. All of the misclassifications eliminate any hope of identifying racial profiling. This is particularly troubling because the San Francisco police are frequently accused of profiling minorities.

So what are they going to do about it? Nothing. The “system” needs updating and the money isn’t there. When asked if they will try to correct the numbers of years gone by, Tomoika says they have no intention on “looking back at those statistics,” and Giffin indicated new practices will “do nothing to correct the arrest report errors.”

Racial profiling does exist and when you are targeted because of how you look, there’s rarely anything done about it. The best course of action is always to avoid a conviction.

Whether you are charged with drug possession or any criminal offense, we may be able to help. Contact our offices to be put in touch with a local attorney today.