For people with chronic drug and alcohol problems, and few options, the criminal justice system can be a revolving door. San Francisco hopes to stop at least some of those repeat customers with mandatory treatment for those they are calling “chronic drunks.” 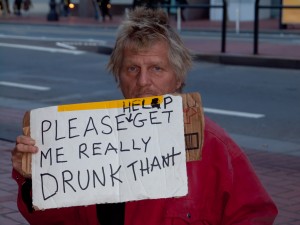 These offenders aren’t your typical one-time DWI arrestees who are average citizens, who maybe made a dumb mistake or have a bad night, and are never in trouble with the law again. These are the (mostly) guys who have been arrested time and time again for offenses like drunk in public. And according to officials, they have a penchant for missing court dates.

Because they don’t seem to come back to court when called – it seems many of them are of the attitude that they have “nothing to lose”— the courts will make it a little more difficult for them to skip out, by requiring them to check-in to an inpatient program.

The San Francisco Gate reports that under the plan, those who have been seen time and time again by local cops for these otherwise minor alcohol-related offenses, would be held in contempt when they are caught—five days for each missed appearance.

During those five days, they would spend the first few at San Francisco General Hospital, where they would dry out. Then they would be moved to the jail to continue treatment under health department officials.

The San Francisco Police Department, Public Health Department, and city courts are ironing out the details, but the plan has Mayor Ed Lee’s support.

Some question, however, if the costly plan will be worth it, pointing out that those with drug and alcohol problems aren’t likely to stay clean unless they are motivated to do so, and that mandatory treatment is hardly the motivation.

Also, many of these offenders have been offered help before and either declined, or accepted and have since relapsed.

“If someone has 20 warrants, you can pretty much guarantee that someone from the health department has offered them some type of help 20 times as well,” said San Francisco’s Superior Court judge Katherine Feinstein.

Mayor Lee says it’s the same group of people who are cycling in an out of the city’s system repeatedly, costing taxpayers an arm and a leg. And the contempt citations would be a city specific ordinance, not a statewide law like how California typically handles drunk driving pleas.

“This has been a long time coming,” he said. “There are 68 people on the streets that have cost us tens of millions of dollars going in and out of the hospitals, courts and jail.”

The pilot program is expected to roll out in the next 30 days.

If you are arrested for an alcohol related crime, whether it’s your first one or not, you can be expected to be treated like a drunk by certain members of the local criminal justice system. Fortunately, as a criminal defense lawyer, we know that’s not necessarily the truth. Whether you are charged with your second or even third DUI or if you face an outstanding warrant for failure to appear, we may be able to help.