Thirty-four year old Michelle Jordan was mouthy when pulled over by police, even she admits it. But the penalty she faced was extreme. Before she was put in the squad car, she was body-slammed twice, right before the two cops fist-bumped each other smiling. And, it was all caught on camera. 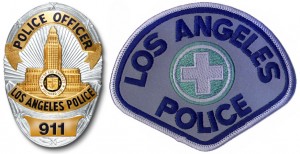 According to the NY Daily News, the nurse was pulled over for talking on her cell phone while driving in northeast Los Angeles. She pulled over in a restaurant parking lot and immediately exited the vehicle to “confront” the officers who pulled her over according to the police.

Finally, the duo get Jordan into the backseat and end the arrest with a “celebratory fist bump.”

Jordan was arrested for resisting arrest. She was booked and later released.

Following the incident, Jordan was covered in cherry-red scratches and scrapes from the pavement. From her chest to her face, she was injured.

Police Chief Charlie Beck said he has “serious concerns about the use of force,” going on to add “We will investigate this thoroughly and hold our officers accountable for their actions.”

Both officers have been placed on desk duty while the investigation takes place.

One of the officers is said to be new, a probationary cop only on the force for 10 months. The other is a 20-year veteran.

The video came from the restaurant’s surveillance cameras, which showed Jordon from the minute she pulled into the parking lot.

How often do scenes like this happen that we don’t hear about? Where someone is mistreated by the cops but it doesn’t hit the media because it wasn’t fortunate enough to be caught on camera. It would seem that for each one we do see, there would have to be some that remain hidden.

We know it’s never a good idea to get “mouthy” with police, because while you could be faced with a cop who is cool as a cucumber, you might not always be that fortunate. And a “mouthy” confrontation can quickly turn into “resisting arrest” on a police report.

If you are charged with disorderly conduct, resisting arrest, or any similar charge where you believe the police acted inappropriately, we may be able to help. Contact our offices today to discuss your case.