When the police seize property, it is usually evidence of a crime. And when this is the case, the property is held while the criminal case makes its way through the courts. Even if it is not criminal evidence, so to speak, the owner of said property is given routes to obtain their stuff back from the department. This is how it works on a regular basis—but the homeless population of Sacramento was treated far differently by local police and Sheriff’s deputies. 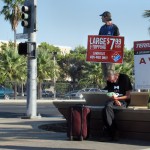 Rather than actually confiscate their property and store it away as evidence of an alleged crime (usually unauthorized camping), the cops were simply throwing their stuff away.

Now, when you think of someone who is homeless, your initial response might be, “But what could they have?” This sort of notion is only supported by a lack of knowledge about the homeless population. Though they may not have a home in which to rest their heads, they do have a life—and that life often involves food, medications, photos, keepsakes, camping equipment, and other property.

In an effort to “clean up the city,” local police were raiding homeless campsites and taking the property of everyone around. Then, they were throwing it away where the owners would not have access to it. As a result, a federal jury ruled that their rights were violated.

Now, the city of Sacramento will be forced to fork over about $796,000 to the 1,143 people who lost property. The Sheriff’s Department settled their case earlier, agreeing to a $488,000 payment. The plaintiffs in the unusual class action lawsuit are already discussing how they will spend their money—from getting new medications or sleeping gear, to renting an apartment.

A vast number of the city’s homeless, and the homeless across the country, cope with mental illness. Taking the little property they do have, including their medications, was not only a move in insensitivity and an unlawful seizure, but could have potentially resulted in hospitalization bills or criminal activity.

City officials said that even before the lawsuit, they had changed their procedures for confiscating property of the homeless, something that is usually done after a warning to vacate public or private property. And while the police have a right to do this, send people off of property they don’t own, they must respect the rights of all people in the furtherance of their duties.

When your rights are violated by police, it can throw any criminal charges filed against you into upheaval. Often, if the cops violate your protection against unreasonable searches and seizures, the evidence they seized as a result of that illegal search can be tossed out of court and lead to dropped charges.

If you are facing criminal charges, you need an attorney on your side who knows the ins and outs of the legal system and knows how best to ensure your rights are protected. Whether you are charged with assault or a drug possession crime, contact our offices today.