In a gardener’s nightmare, 32 homes in Santa Rosa were raided a month ago. The crime: growing pot, and lots of it. According to the Press Democrat, nearly every house in the neighborhood—which lies just south of the Corby Auto Mall—had a crop growing in the backyard. 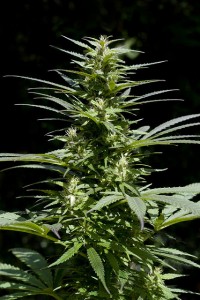 The plants peaked over fences and you could smell the marijuana from the street. Thirty-two houses with marijuana gardens in a single neighborhood is pretty remarkable when you stop and think about it.

Law enforcement was tipped off when someone complained. A helicopter fly-over revealed just how big the “problem” was. So, to remedy the situation, SWAT teams moved in—carrying guns and throwing flash-bang grenades all the while.

Thirteen people were arrested. Thirteen people from 32 homes. What about the other residents? At least one was not arrested because she had her medical marijuana paperwork, paperwork that said her garden was legal. The cops still destroyed it.

People within the neighborhood, even those not growing marijuana, said they knew the raid was bound to happen sooner or later, but called it overkill on the part of law enforcement. Shields, guns drawn, and masks to confiscate marijuana does seem a little over the top.

In their defense, the cops said the force was necessary. They were sending a message. “Their tactics were deliberate, selected in part because there is a heavy gang presence and lots of children in the area.” (Lots of children seems like a good reason to bring out the grenades and guns?)

This wasn’t a targeted and neatly executed search. This was shooting fish in a barrel. The cops emptied the homes, walking whole families out to the street while holding weapons. Mothers held babies and children played while masked cops dressed like soldiers ripped apart backyards and searched homes. Definitely not a scene that seems to be good for the children, as officials would have you think.

Neighbors say the growing operations were not gang related—that many of the residents grew for personal use, some for their medical needs, and a few “to make ends meet”. But, they maintain that the neighborhood is not a gang-infested community and that these gardens had nothing to do with large, organized drug operations.

More than 300 plants were confiscated—ripped from the ground and piled onto front yards before being hauled away. For those who are legally entitled to grow marijuana (with medical marijuana clearance), they will have to start their gardens from scratch, and looking for any sort of reimbursement from law enforcement is sadly laughable.

If you are charged with a marijuana offense—whether it’s possession or operating a large growing operation—we may be able to help. Contact our defense attorneys today to discuss your case and the legal options available to you.