Governor Jerry Brown called the prison emergency in California “over” this week in a press conference. He said that– though the state is a long way from reducing the prison population by 30,000 as the feds mandated—California can’t stop shoveling money into the “rathole of incarceration.” But according to critics, Brown has a lot of work to do and perhaps more responsibility than he realizes in putting a stop to the “rathole”. 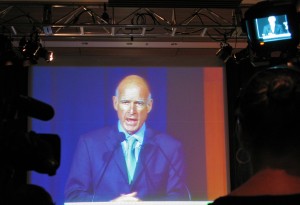 It’s been about two years since the U.S. Supreme Court ordered California to reduce it’s staggering prison population. They determined that the crowded conditions amounted to cruel and unusual punishment—with inmates suffering subpar medical care and deplorable living conditions. Since then, they’ve cut about 20,000 off the prison populations in an effort to comply. But, it seems they are doing nothing more than shuffling people around rather than dealing with the bigger picture.

“The state refuses to engage with the fundamental problem, which is that we incarcerate far too many people for far too long,” said Allen Hopper with the American Civil Liberties Union of Northern California. “What has gotten us into this mess in the first place is the constant ratcheting up of sentencing laws.”

But rather than look at the laws that are sending a staggering number of Californians to prison, the state is instead simply changing which institution they send them to. Since the mandate two years ago, many nonviolent offenders are being housed in county jails rather than state-run facilities. So, while it may look like the incarceration rate has fallen—it’s simply moved.

In some prisons, things are better. Two-men cells actually hold two men. But in other institutions, the same can’t be said. In Avenal in Northern California, for instance, they are housing 5,000 men in an institution made to house 3,000—running at 160% of capacity.

The state has an answer for it all, however, saying the feds are “nitpicking” and expecting perfection. They say the way that prison capacities are calculated is flawed and that everything is fine.

“To pretend everything is O.K. is just crazy,” remarks Prison Law Office executive director Donald Specter. “There are still prisoners who are not getting the care they need, and there is no way they have timely access to a doctor.”

According to Brown, the crisis is over. But it seems clear that the real crisis, the cause of this “rathole”, was never even acknowledged.