They wore distinctive clothing, had similar tattoos, and celebrated shootings. But the members of this gang weren’t standing on a street corner, they were jumping out of cop cars. They were members of the L.A. County Sheriff’s Department’s “elite” gang enforcement team.

By all accounts, the group was a gang. But media sources are being cautious to call them that—instead using words like “clique” or “rogue group”. 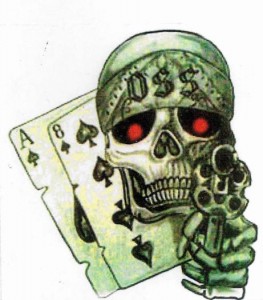 They called themselves the “Jump Out Boys”. Their inclusion in the gang meant they got a tattoo—a skull wearing a bandana and holding a gun.  In true gang form, the tattoo had various playing cards behind it and smoke would be added to the gun when the gang member celebrated a shooting. Yes, the gang would change their tattoo when they shot a civilian.

The Jump Out Boys were reportedly “discovered” when they made a pamphlet describing their “group”. But, as the secretive nature of police forces are well-documented, there is a good chance that many in the force knew about the gang before it’s “discovery” became official.

The L.A. County Sherriff’s Department alone has a “long history” of secret groups. Officials say they are now working to root out those cliques that serve to tarnish the department’s image.

Investigators say they found no criminal behavior involved in the Jump Out Boys. The investigators, incidentally, were also employed by the Sherriff’s office.

Seven members have been informed that their firing is imminent. Obviously, the Department couldn’t keep them on staff after the discovery of their involvement went public.

“We get called a gang within the badge? It’s unfair,” said one member. “People want to say you have a tattoo. So do fraternities. Go to Yale. Are they a gang?…. Boy Scouts have patches and they have mission statements, and so do we.”

Boy Scouts, Yale students, and fraternities, however, don’t carry firearms as part of their daily routine. Nor do they have the power of a police officer. And he may have overlooked the fact that they don’t celebrate shooting at people.

“We do not glorify shootings,” he went on. “What we do is commend and honor the shootings. I have to remember them because it can happen any time, any day. I don’t want to forget them because I’m glad I’m alive.”

While the members of the badge-wearing, gun-toting gang don’t want to acknowledge that glorify, commend, and honor are very close in meaning, the people of L.A. County do.

If you are charged with an offense in California, whether it be a drug crime or a gun offense, you need to know someone is on your side—someone who won’t be celebrating if you go down. Contact our offices today to discuss your case and how we might be able to help.