People of the Los Angeles area are accustomed to seeing Sheriff Lee Baca’s name associated with drama in the news. But, one agency has decided he should be seen for his achievements instead. The National Sheriff’s Association recently named Baca their Sheriff of the Year, despite him having a year full of turmoil and trouble.

While some say it’s the troubles that have plagued his office that have allowed him to excel and earn the title, others think his new honor is laughable.

“You gotta be kidding,” said the legal director of the ACLU of Southern California. “The years of malfeasance in the jails and the blatant failure of the sheriff to address the problems make his winning this award mind-boggling.”

A spokesperson for the sheriff sees it differently, however. “This is his best year because people do their best when they face their biggest challenges and he is excelling,” said Steve Whitmore putting an optimistic spin on things. 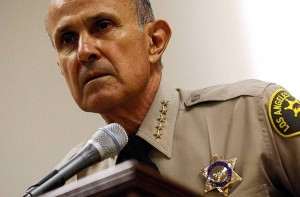 Baca was chosen by a panel out of a pool of 2,700 sheriffs across the country. About ten were nominated for the honor. The panel, which consists of former and current sheriffs and corporate sponsors, reviews applications for the Sheriff of the Year and makes their decision based on those and any personal research.

The Association points to him managing the largest Sheriff’s Office in the country, with the largest annual budget ($2.5 billion). They also say he has provided educational opportunities for inmates and reaches out to religious groups within the county.

But apparently the panel was blinded by the size of Baca’s department and overlooked a few issues within the Los Angeles County Sheriff’s Office:

If Baca is the Sheriff of the Year, or if this is the model sheriff’s should follow if they want to receive such accolades, the title of “Sheriff” will be a tainted one.

Whether you are arrested by LA County Sheriff’s Deputies, or another agency in the state, you could be facing prison time and serious consequences. Whether it’s a drug charge or a sexual offense, we may be able to help. Call us today to discuss your case and the options available to you.