Governor Jerry Brown is defying federal orders, orders approved by the Supreme Court. But, he’s not only defying them, he is doing it loudly, and claiming that any progress that’s been made towards the fulfillment of those orders should be seen as good enough and justification to abandon them altogether.

At issue here isn’t some regulatory reorganization, or legal shuffling with no impact on the people, it’s the state’s prison system—accused of being too huge to provide proper care to the inmates it houses. We are talking about people—convicted criminals sure—but people. And this is just part of the reason Brown’s assertions of “good enough” cannot be taken lightly.

The federal orders came down in an attempt to get the state’s prison system in alignment with the 8th Amendment. You know, the one that protects people against cruel and unusual punishment. The overcrowding situation had gotten to the point where the state was unable to provide proper medical and mental health care to all of the people within their custody. Among other things, the feds ordered Brown to cut the state’s prison population by 137.5 percent within two years—surely no easy task. 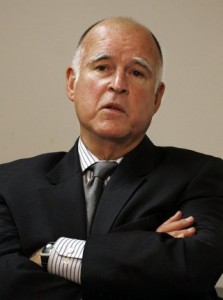 Brown has worked toward that goal even if it seems he never really had the intention of completely reaching it. As they began shifting inmates from state facilities to county jails, they experienced political pressure. This pressure was just one motivating factor in Brown’s decision to buck the feds.

According to The Atlantic:

On January 8, 2013, Gov. Brown announced that as of July 2013 he would no longer use whatever “emergency powers” he has as chief executive to comply with the order. He announced that “prison crowding no longer poses safety risks to prison staff or inmates, nor does it inhibit the delivery of timely and effective health care services to inmates.” California’s governor, in effect, unilaterally declared an end to his state’s constitutional obligation to end the prison emergency. One day earlier, his lawyers had quietly filed motions to terminate federal judicial oversight over state prisons.

Brown says “good enough” should be just that, that progress should be enough for the feds to back off. But what Brown seems to be missing here is the entire point—not that the federal orders were put in place to make his life difficult or be a symbolic gesture towards justice, but that they were designed to actually bring about some level of justice, to ensure that inmates were not treated like chattel.

No matter what sort of charges you are facing, you have rights. You deserve to be treated with dignity and to have your constitutional rights protected throughout the criminal justice process. Fortunately, a local criminal defense attorney may be able to help.