Jury nullification doesn’t get the attention it deserves—you may have not even heard of it. To some, it’s a way of skirting the “proper” route of justice, but to others it’s a powerful statement to the courts that the people are opposed to the ethics of the case at hand. Discussions about jury nullification are rare, but stories of elected officials actually urging it are unheard of. Until now. 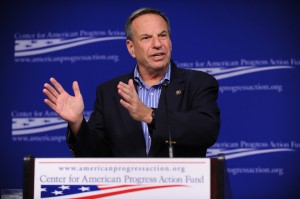 San Diego Mayor Bob Filner has recommended a federal jury nullify the case of Ronnie Chang, a medical marijuana dispensary operator. What Mayor Filner is asking, basically, is the jury to reach a “not guilty” verdict whether or not Chang’s actions violate federal law. Why? Because Chang was operating under compliance with state marijuana laws, the laws supported by the people of California, and shouldn’t be criminalized just because the federal government wants to make an example out of him.

“This is way overdoing it when local laws, state laws allow compassionate use of medical marijuana,” said Filner to reporters outside of the U.S. District Court complex Monday. “Someone should not be going through this stage of prosecution for trying to help people to have access to medical marijuana.”

What Chang was doing—providing Californians with safe access to their medicine—is against federal law. The feds know he was operating within state law and they simply want to throw their weight around and express their general disgust at the fact that no one wants their War on Marijuana any longer.

So, how do federal prosecutors on the case feel about all the attention? As expected, they are kicking and screaming.

Firstly, they’ve requested a YouTube video showing an interview of Chang be taken off line, and Judge Michael Anello said he would make that request to the nonprofit that posted it. But, prosecutors also want to remove “all material regarding the case” from the Internet and social networks. In other words, they want a blackout. Fortunately, they’ve backed down a little from that overreaching request.

This case could send a clear signal to the federal government should the jury go along with what Mayor Filner is asking. And they should. The people of California have created a working medical marijuana system that gives sick people access to safe medicine. The federal government is merely upset about their lack of control and how the state programs here and elsewhere could ultimately affect their so deeply treasured War on Drugs.