If a unit of the local police department is entirely dedicated to drug investigations, one would put some level of trust in their competency to double-check facts before raiding a home with guns drawn and masks on. But in far too many cases during this nationwide “War on Drugs”, one’s trust would be misplaced.

In one of the more recently reported botched drug raids, a family was ripped from their San Bruno home as officers looked for someone who didn’t even live there. Now the family is suing, but the local Sheriff’s Department admits no wrong-doing. 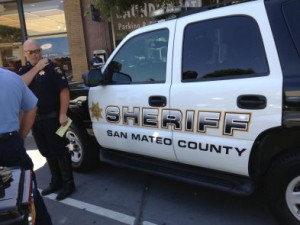 According to the Daily Journal, the raid happened early in the morning as the woman of the house was getting ready for work, undressed in only her bra and underwear. The county’s drug task force raided the home in SWAT fashion, startling the woman so bad that she peed on herself, and then dragging her outside and into the patch of grass where her dog had recently used the bathroom. There she was allowed to sit, handcuffed for 15 minutes.

Her adult son was reportedly “manhandled” and made to “crawl on his knees in the dog feces to join his half-naked mother in clear view of onlooking neighbors.”

As for the elderly grandmother in the home, she became so distraught on the scene that she had to be taken to the hospital.

The cops were there looking for someone specific, a suspect they had met in a traffic stop a few weeks earlier. In that stop, the officers found methamphetamines, marijuana, and a car full of men dressed as if they may be associated with a gang. One of the occupants, the investigating officer determined, lived at 840 Sixth Ave., the same multi-family dwelling that the innocent family did.

In the warrant, the officer said he personally visited the address to confirm the suspect resided there. But the family’s attorney says if he actually had visited, he would have realized there were multiple apartments in the home.

“It’s always unfortunate when innocents are present when a warrant is executed, but it happens. The nature of the activity is that sometimes innocent people are present and inconvenienced,” said attorney John Beiers, who represents the Sheriff’s Office.

While no one was seriously physically injured in the raid, it was far more than an inconvenience, and only one of many botched drug raids in the state, executed under the guise of crime reduction and the Drug War.

If officers are willing to criminalize and rough-up an innocent family, they are likely willing to do far more to someone who’s actually broken the state’s drug laws.

These incidents are not just an unfortunate mistake, but an inevitable outcome of the militarized drug war mentality that these forces have adopted.